Tour 2006. What a RUSH! The real mother load of this tour was the friendly folks of northern California. I now know why people flocked to California in the 1800’s, it wasn’t the rush for gold, but instead the golden hospitality! 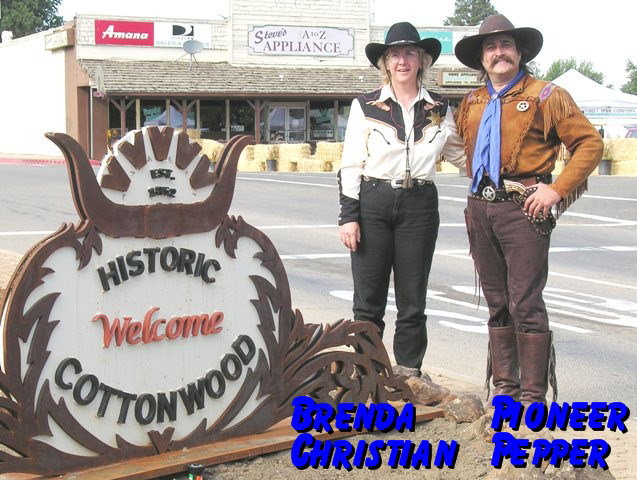 I first of all want to thank Brenda Christian, from the Cottonwood Enrichment Council, www.cottonwoodcalifornia.com for making the Wild West Art & Wine Festival a reality. A true example of taking a dream, molding it, and through hard work, determination, and perseverance, making it an event that was not seen in Cottonwood’s history. Brenda and her crew all deserve a debt of gratitude from the entire community.

Not only did Brenda head up the festival, but also put together a fabulous set of iron sculptures right down Main St., entitled “End of the Trail”. A collection of iron figures depicting a cattle drive from years gone by. The ranchers in the area sponsored these sculptures and have their brands on the actual figures. It is really something to see. The ribbon cutting of these sculptures started off the festival and then The Sunset Pioneers sang the Star Spangled Banner to make it official. 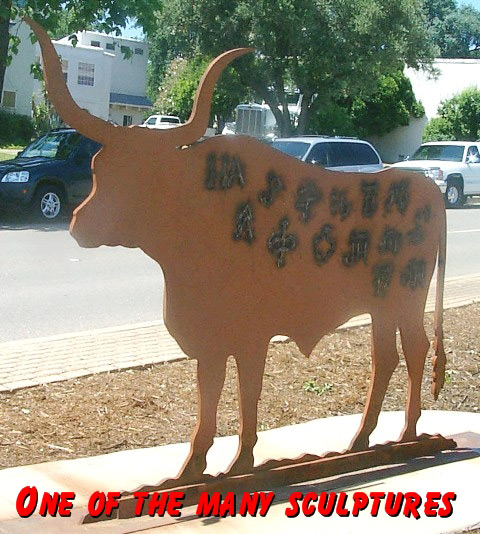 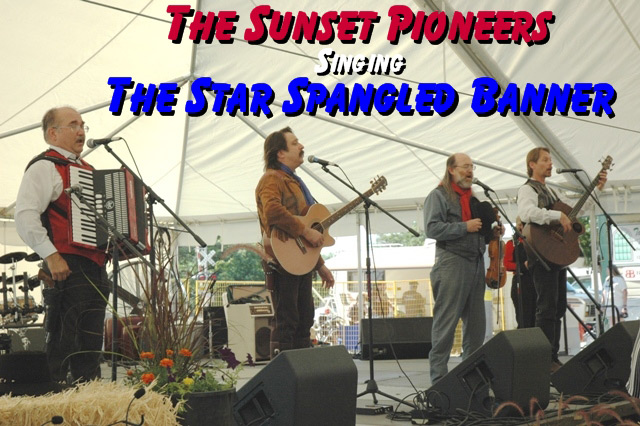 What was mentioned so much during the festival was the record heat. But, even the heat could not dampen the attitudes of the staff, vendors, and attendees. The Law Dawgs and Pistoleros, www.lawdawgsandpistoleros.com an old west re-enactment group, sure was an audience favorite. They know what it takes to entertain, and did a superb job not only during the festival but on the TV commercials promoting the festival.

Some of the entertainment joining us on the main stage was, “David John & The Comstock Cowboys”, www.comstockcowboys.com and “Mary Youngblood” www.maryyoungblood.com . Their great sounds flowed off the stage and to their fans. Great sounds were also heard throughout the festival by the “Scouts of the Cascades”. www.scoutsofthecascades.com . They strolled up and down the boardwalks of town and thoroughly entertained the crowds. I personally admired not only their great harmonies and wonderful attitudes, but also, their addition of some noise maker props that really added to the fun of the event. 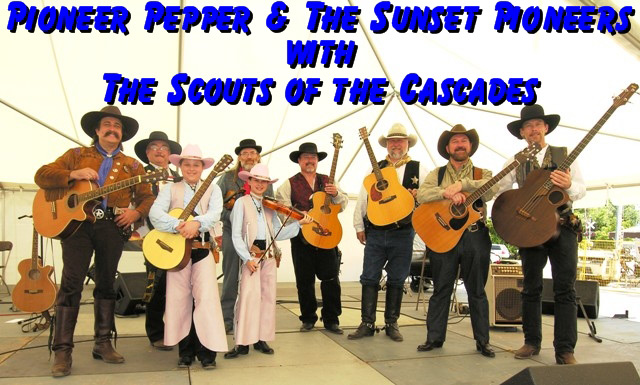 Actor and author, Peter Sherayko, joined the festival as Buffalo Bill. I swear, I thought it was Buffalo Bill. Peter and I have known each other about a year now. We first met at the Western Film Festival and Little House on the Prairie reunion held in Tombstone July 2005. It is always great spending time with him. He also presented me an autographed copy of his new book “Tombstone The Guns and Gear”. I will cherish this always. Thanks Peter! 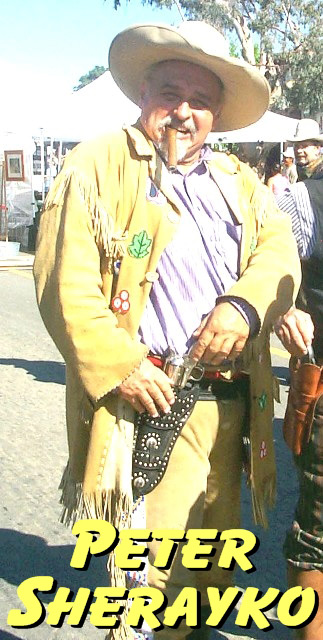 This being a wine festival, was a special treat. We tasted and tasted and tasted! Two of the sponsoring vineyards really treated us fantastic. Amy and J.R. at New Clairvaux Vineyard www.newclairvauxvineyard.com had a booth set up right next to our Wagon Wheel Mercantile. My wife Tomahawk and Doc’s wife Quick Draw seemed to be happy all weekend. 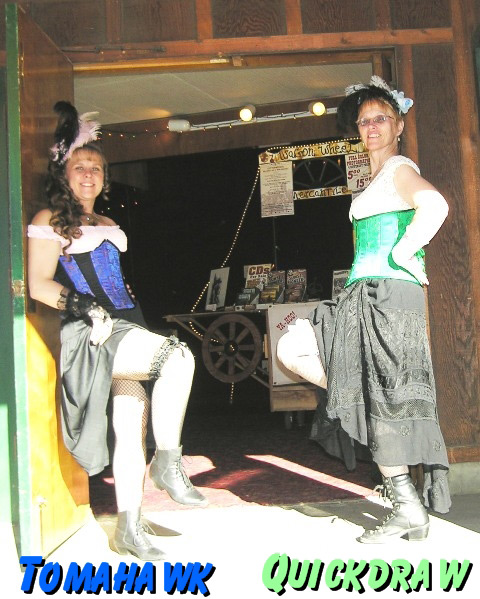 During the week of promoting the festival, we were invited to the Burnsini Vineyards (530)347-4765, for a tour and a taste. It was so exciting to go behind the scenes of such a great winery. Burnsini Vineyards actually bottled a special Petite Sirah for the festival. It was absolutely delicious, as were the other six bottles we sampled. Every one in the group had a favorite. Tom Burnham, general mgr & sales, was chosen to be our “Famous Cowboy” at Sunday’s show. He was a hoot, and kept his wife, partners, and the audience rolling! 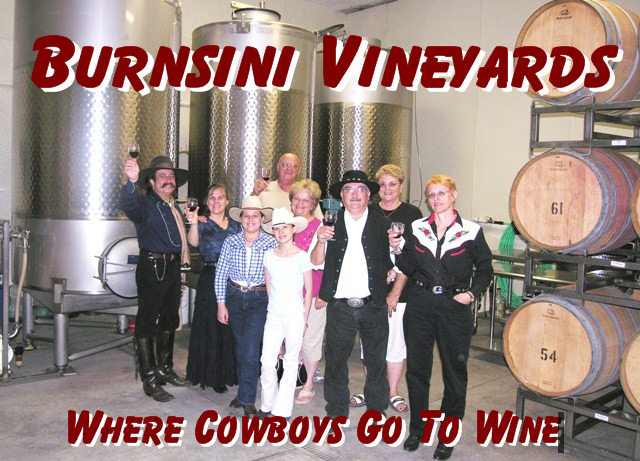 During the week of promoting the festival, The Sunset Pioneers were treated to not only more great hospitality, but, great food as well. We were invited to the kick off BBQ held at the home of Maurice and Mary O’Keeffe. We got to meet the council, the festival organizers, and the wonderful people of the area. The food was superb and we had a chance to sing for our supper. 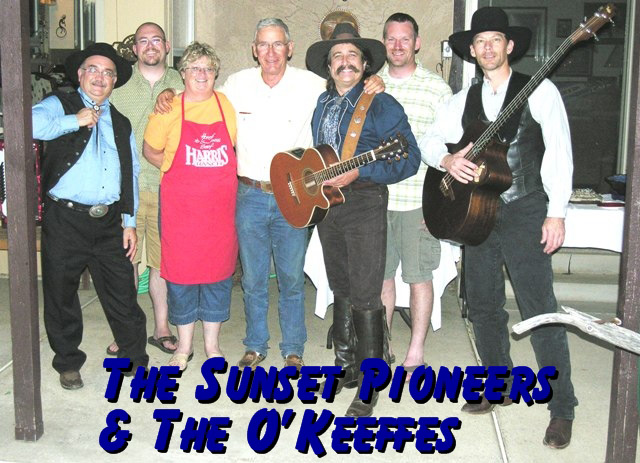 A trip to Vic’s Branding Iron Restaurant had my taste buds jumping with the juices from his famous steaks. Vic Woolery himself, grilled to perfection the meal for The Sunset Pioneers. The restaurant is located in the livestock auction yards, and was just the perfect setting for a perfect meal, cowboy style! Vic’s Branding Iron is a must stop destination when visiting the area. 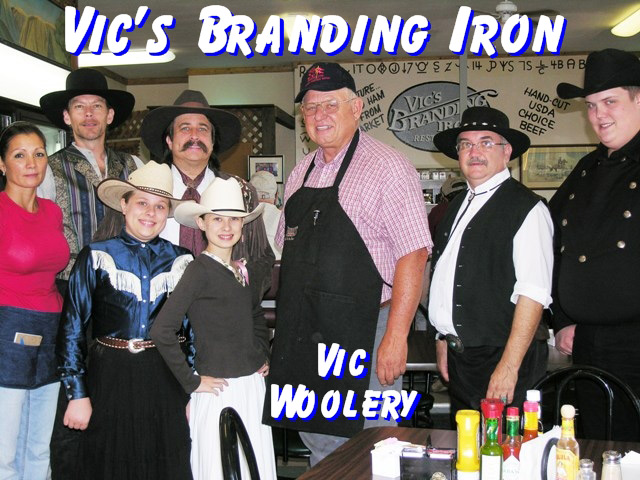 The next day we were brought right downtown, over to Grandma’s BBQ. Well the owner, Virginia, who looks way too young to be a grandma, laid out the welcome mat for The Sunset Pioneers. She spoiled us, as all grandmas do, with a table full of special recipe BBQ favorites that had all of us dazzled with the great flavors. She smokes the meat on site and the smell of it alone drew us back for more. We rounded off the evening with some home made shakes and gourmet coffee creations. 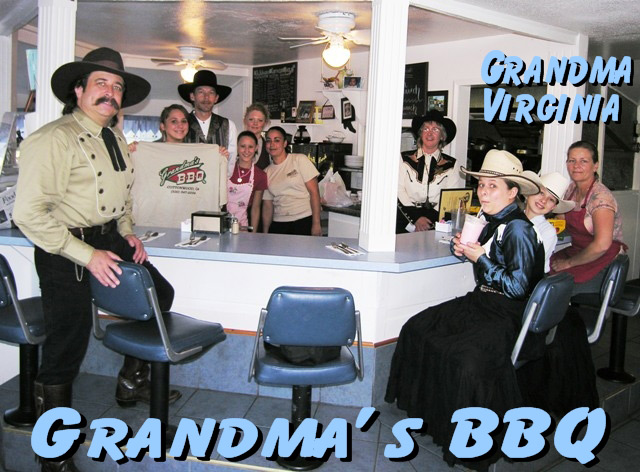 Roger’s Frosty was the next day’s treat with some wonderful old fashioned hamburger delights. We all ordered a variety of dishes, and everyone was fantastic. We found ourselves trying out each other’s orders. The root beer floats were a favorite dessert among The Sunset Pioneers. We did not get a chance to meet the owner of Roger’s Frosty, Jim & Rose Galba, as they could not get back before we had to leave for sound checks.

For sound and lighting, we had our production engineer, Nevada. It was his first tour and he did an unbelievable job. He engineered the Yreka Concert, the Etna Concert, and front of house sound at the Cottonwood Festival. I also owe him thanks for the use of his laptop computer throughout the tour. Nevada had the opportunity to work with Merle Haggard’s sound engineers, Loren Kemper and crew, Robert & Mark, from Kemper Stage and Sound, who did the sound in Cottonwood. They were a top notch team of engineers and were able to overcome any and all situations that arose from the record breaking temperatures. Great job! 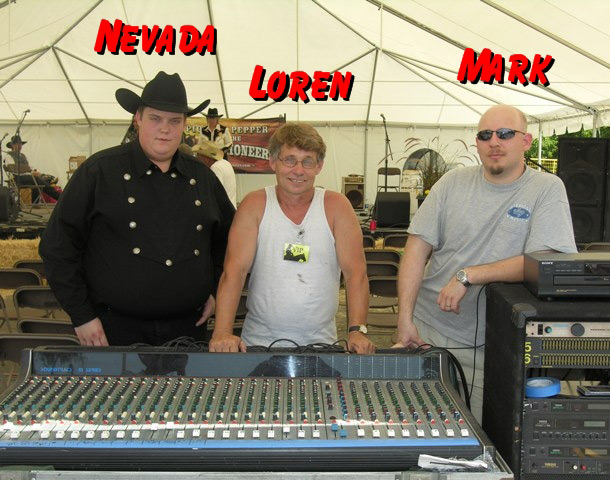 Keith Henrickson from Dan Gamel Redding RV www.gamel.com , supplied The Sunset Pioneers with beautiful motor homes for our use for the duration of the Cottonwood Festival. We want to thank you for the lap of luxury you allowed us to have. I think we need a couple of these!

Promoting during the week prior to Cottonwoods Festival was a busy blend of newspapers, live guest spots, radio interviews, and TV appearances. Mike Quinn of KLXR radio had us in the studio on his show. We had so much fun and I ended up recording some commercials while we were there. Mike was also the emcee for the Cottonwood Festival, and was the best “darn tootenest” emcee that ever was! 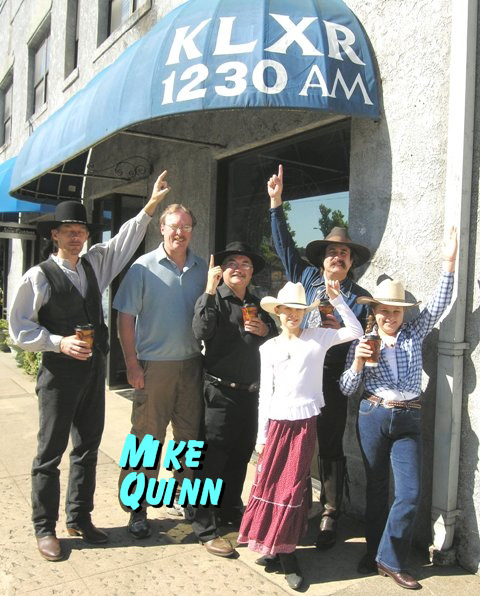 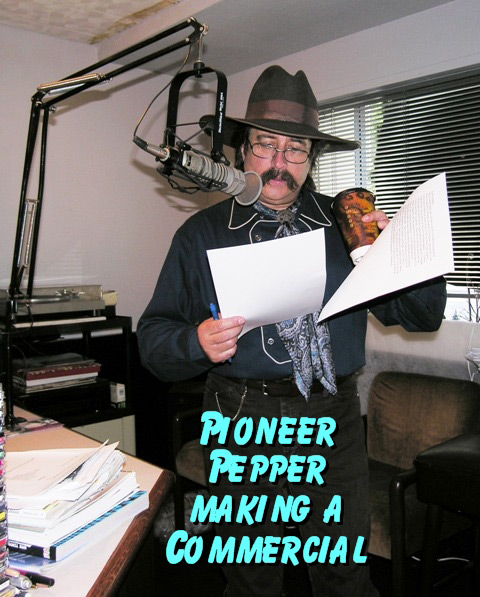 I also did a phone interview on KBLF with Cal Hunter.

The United States Air Force Brass Band was performing at The Mosquito Serenade Concert in Anderson, CA. I was asked to co host the concert with Ken Hartman, the man behind the concert series. He presented me with a great guest announcer shirt. Thanks Ken. I want to mention that Ken was the stage manager for the main stage at Cottonwood’s festival, and did a great job. I also want to mention that he promised to take me fishing. 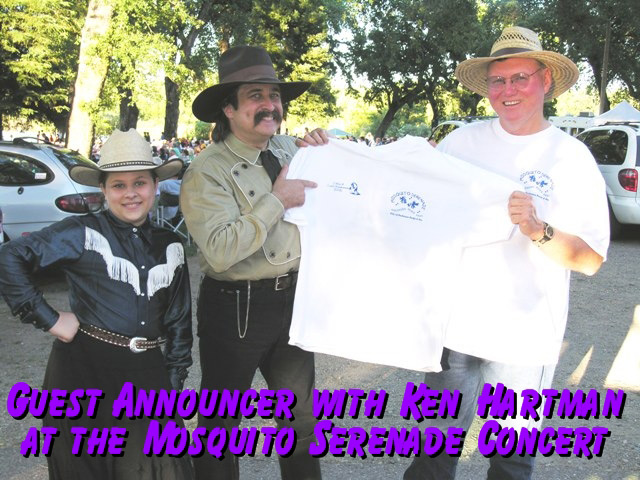 “Wake Up” was the morning show on Channels 12 KHSL-TV and 24 KNVN-TV. We were on very early (for musicians) and I think it showed. Phillip Schmidt, the production manager, immediately put on a fresh pot of coffee when we arrived at the TV station at 4:40AM. He then went out and bought us a box of doughnuts to eat before we went on the air. Phil was our hero that morning. He not only supplied us with the early morning essentials, but made us look good even at that hour. His attention to detail on and off the set was truly professional. We had the opportunity to perform a few songs and had a nice interview with the show’s anchors. Thanks Phil. 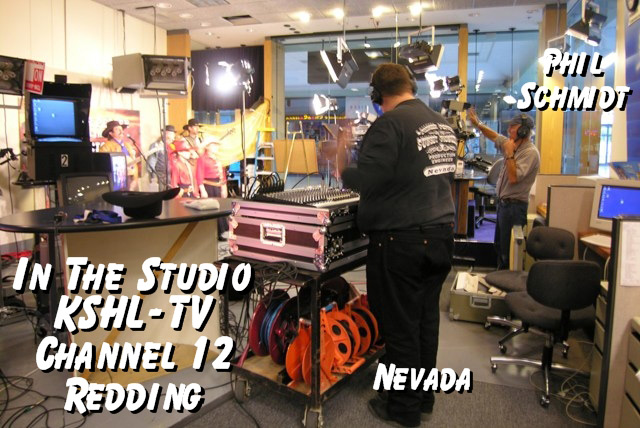 Several area newspapers wrote great articles about the event and we had a fantastic centerfold picture of The Sunset Pioneers in the Searchlight newspaper. We never had a centerfold before?!?

On the main stage, The Sunset Pioneers performed both days to northern California’s great audiences. 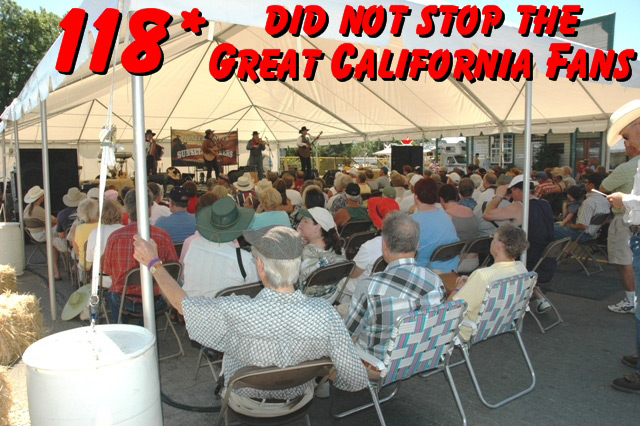 A memorable moment was doing attribute song to John Adams, one of the originators of the festival. John had suffered a severe heart attack before the event and was still in the hospital during it. The Sunset Pioneers filmed a tribute “Back in the Saddle” and hope we have the opportunity to meet him at the next year’s event. On the last day of the festival, at the final hour, The Sunset Pioneers had the honor to close out the festival with a traditional Happy Trails ending, with all the folks of importance on stage with us to bid farewell to the first annual Wild West Art & Wine Festival! Getting ready for the 2nd annual! 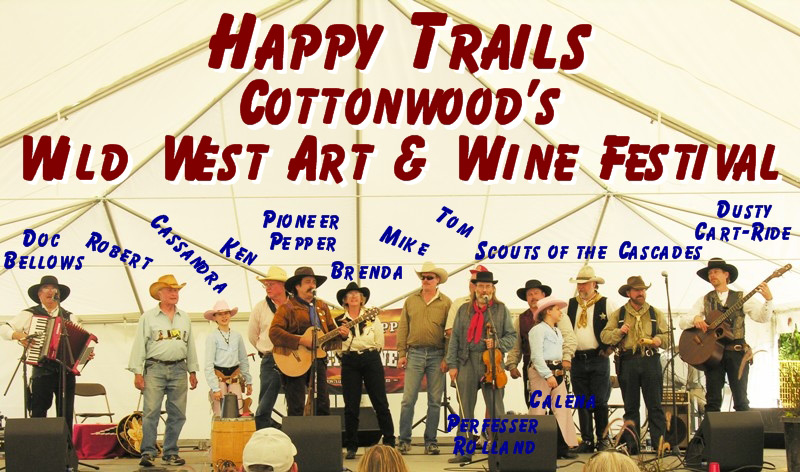 The week prior to the Wild West Art & Wine Festival in Cottonwood, The Sunset Pioneers performed In Yreka Ca and Etna Ca. Jeff Shinn from the Yreka Community Theater was a wonderful host and made the concert a lot of fun. His crew was great and he even supplied us with some great cold refreshments after the show. Thanks Jeff. 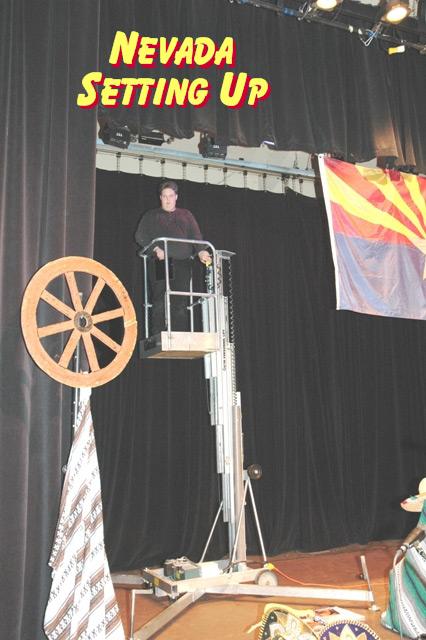 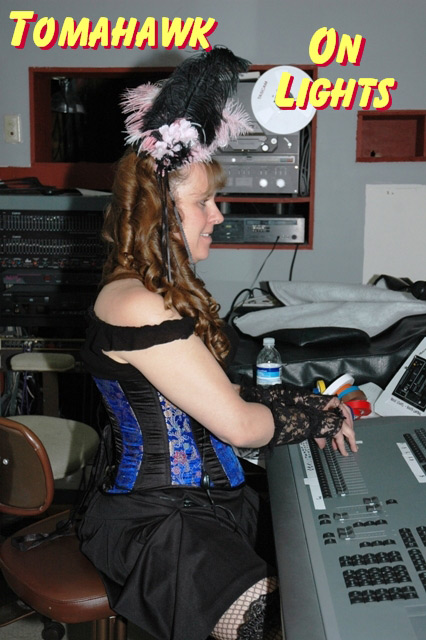 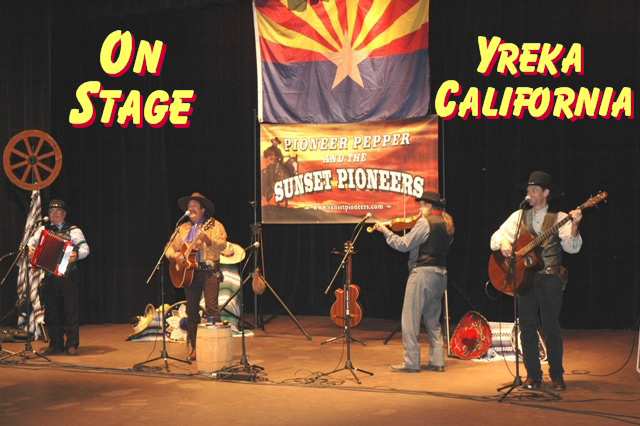 Etna California. Well there is a town that has it all. It is nestled in the ScottValley and it is picture perfect. We rolled into town late morning for set up, and were greeted by waving people on the streets! It was pure pleasure from there on out. Rick Perkins and his team from the Scott Valley Theatre company, made the Avery Memorial Theater come to live with freshly painted western scenes and a welcome Sunset Pioneers banner right on Main St. 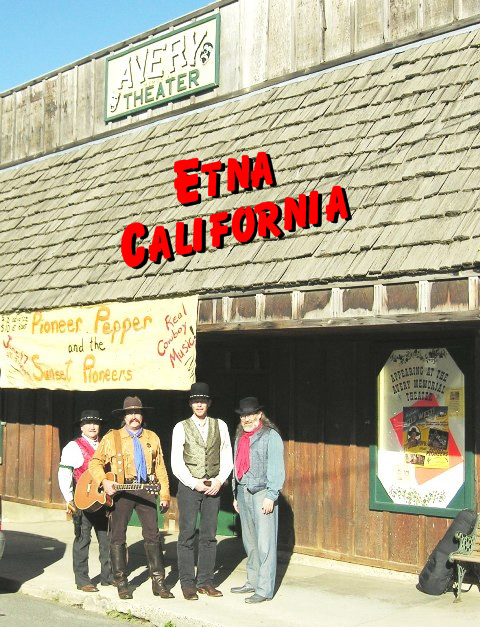 This theater was an old movie theater and it was as fantastic and warm as the people that filled it for the concert. 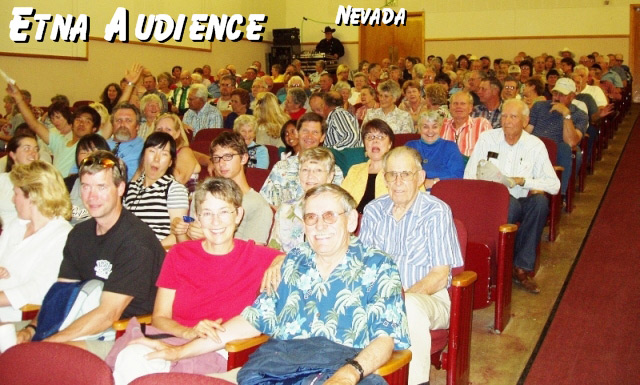 There is one gal that I want to give special thanks to, and that is Che’usa Sienna Wend www.che-usa.com . She was the force behind having us in Etna and the reason the show was such a success. Che’usa and Ed Whipple (great grandson to noted wagon master James Wilson) also came down to Cottonwood to watch us there as well. Che’usa sent me slide shows of the events and just watching them brings back so many fine memories. Thanks again for all you did!

As we wind up the tour, I want to make special mention again of Brenda Christian from The Cottonwood Enrichment Council. The undertaking of a first year event has so many behind the scenes logistical hurdles, that most events are scrubbed before they even happen. This event was no exception with hurdles, except that the determination, vision and perseverance of Brenda and staff, made the Wild West Art & Wine Festival one of the most up beat and greatest festival attitudes that I have ever witnessed. And that was despite the 118* record temperatures. Brenda, you are the best, and your father Robert, was a man I will never forget! 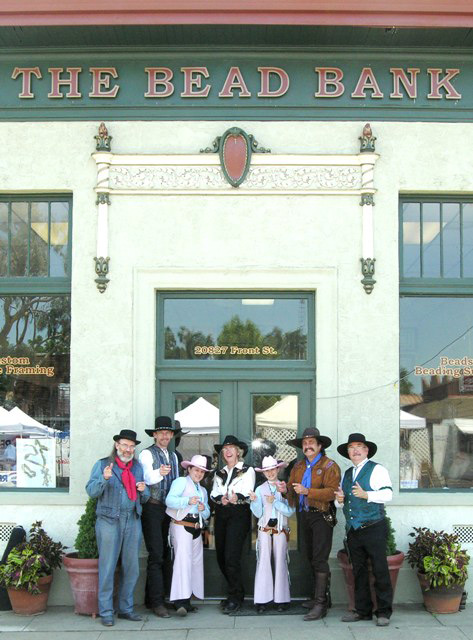 Brenda also owns the Bead Bank in Cottonwood and treated Tomahawk, Cassandra, and Calena to some beautiful jewelry that she made. We even had the opportunity to work late into the night at the shop. 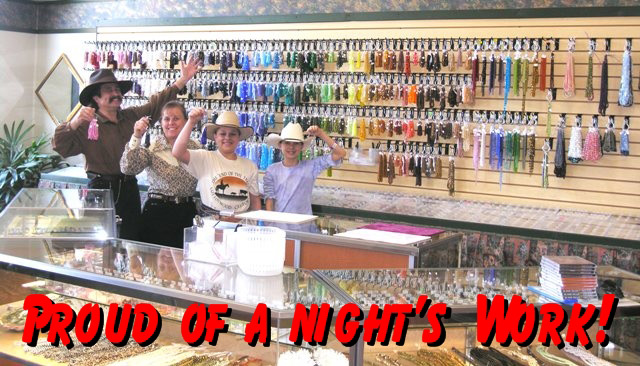 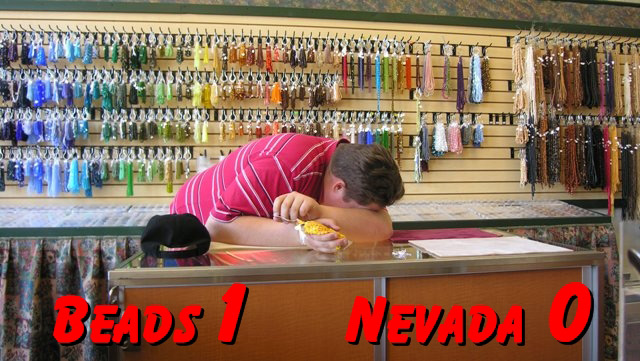 The Amerihost Inns of Yreka, CA and Anderson, CA was where The Sunset Pioneers called home during the tour. Thanks for the great sleep and endless supply of coffee! 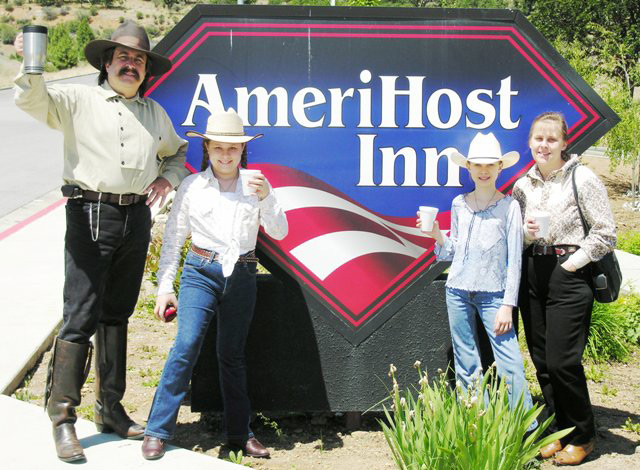 Well, that wraps up our California Tour 2006. From myself, Pioneer Pepper, Doc Bellows, Dusty Cart-Ride, Perfesser Rolland, Nevada, Tomahawk, Quickdraw, Cassandra, and Calena, I want to thank everyone who had a part in making the tour so enjoyable for us, but most importantly, to all of you who came out and supported The Sunset Pioneers and the events of the tour. Without you, none of this would be possible. MANY THANKS!